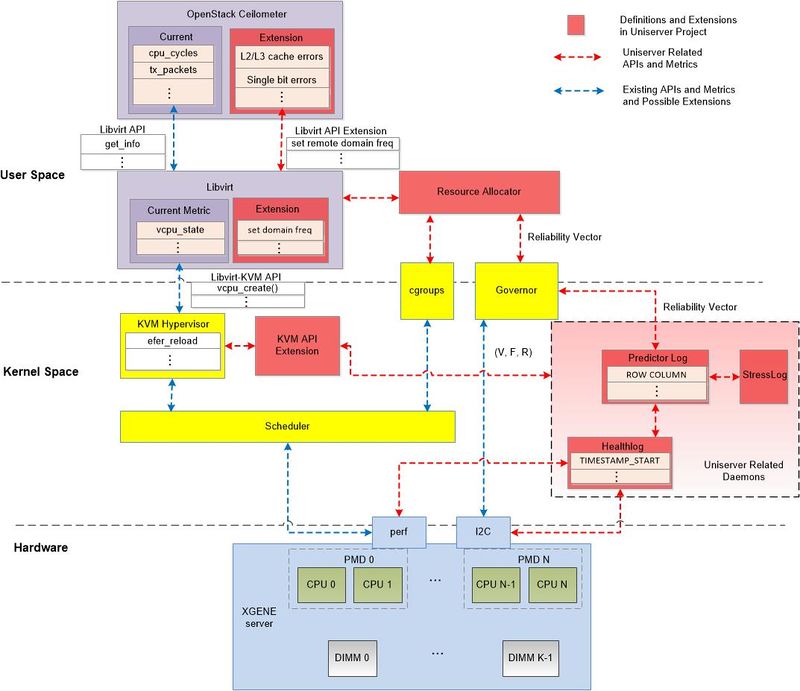 Figure 1, depicts the different layers of the Uniserver ecosystem and visualizes the flow of the information between them through the essential components. One of the most fundamental assumptions in the system architecture of the Uniserver platform is that each CPU and DRAM DIMM may have intrinsically different capabilities. As explained in the deliverables D3.1 and D4.1 in the X-GENE2 the chassis of the Uniserver the CPU Voltage/Frequency can be set separately on each PMD (consisting of 2 CPUs and each of 2 levels of cache L1/L2) and the DRAM refresh-rate/Voltage/Frequency can be set per channel or per DIMM. As explained in the deliverable D4.1 the configuration values such as Voltage, Frequency and Refresh rate of the system and their subcomponents can be controlled by accessing the appropriate hardware sensor register and ACPI state register through the hardware registers and software (e.g. i2c for Linux) available on the X-Gene microserver. Power and thermal of different hardware components such as DRAM, DIMMs, SoC and PMD can be recorded in the X-Gene microserver through the available thermal and power sensors. At the hypervisor layer, HW metrics related mainly to power and performance are already monitored such as CPU and memory utilization, cache misses etc. by utilizing an existing API. In Uniserver we plan to enhance such an API to make it able to collect and monitor Reliability related information by interacting with the introduced daemons. For example, CPU errors could be acquired from Healthlog to Monitor CPU module through new functions that are explained in Section 3 (e.g. get_healthlog).

We would like to note here that the hypervisor (i.e. KVM) is a module within the kernel space along with other modules of the Operating System such as the scheduler, governors, cgroups etc. which are used to manage and direct the overall system operation. The hypervisor is responsible for creating and running one or more virtual machines (VMs) on the so called guest machines (i.e. in the userspace). In general, in Linux, the used Operating System (OS) in Uniserver that the memory is divided into two distinct the user space and kernel space. The user space, is a set of locations where normal user processes run (i.e. everything other than the kernel). The role of the OS kernel is to manage applications running in this space from messing with each other, and the machine. The kernel space, is the location where the code of the kernel is stored, and executes under. Processes running under the user space have access only to a limited part of memory, whereas the kernel has access to all of the memory. Processes running in user space also don't have access to the kernel space. User space processes can only access a small part of the kernel via an interface exposed by the kernel, the system calls.

Redirect the Hypervisor to Reliable Domain in Memory

Is it worth it? Are there some sizeable data structures to justify this approach, for example, large buffer caches for (file) I/O?

Is this viable? Especially challenging is to verify that a core has been set to reliable from relaxed execution.

Checkpoint and restart at the hypervisor level

Profiling of the memory structures by lifetime, sensitivity to errors and callsite (thus type of objects) can help distinguish between data which should be checkpointed and data that may not need to.

In this section, I hope to propose a full protection solution for hypervisor. To backup hypervisor and reovery it, our snapshot should record hypervisor state and VM state with the lowest record consumption. In details, a hypervisor corruption including the following cases with memory errors (1/double bit flip) and CPU errors (CPU voltage/frequency/cache interrupt). In my previous work (2016.10-2017.2) I simulate error injection to the QEMU hypervisor and trace the impact. To backup hypervisor data, we should get familar with the which kind of data should be backuped in the QEMU. In this Wiki, my approach does not target to a definited data structure or state, but our target is to achieve selective backup and recovery using snapshot (checkpoint). Basically, I catalog the data of a running hypervisor with the following, where based on the different data class, I propose different data protection solution: 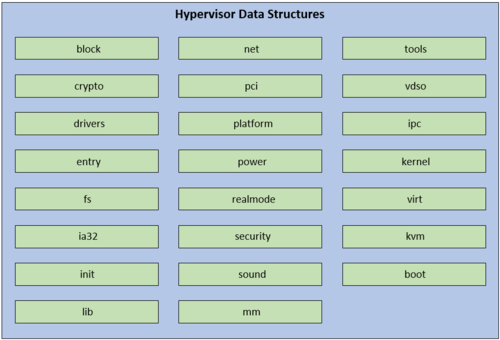 Figure 2 lists the useful QEMU data structure. Accordingly, we focus on providing snapshot and roll back functions to QEMU file system based on correctable and uncorrectable errors (UTH). If errors trigger the interrupt or exception of QEMU. To an optimistic case, our fault-tolerant module could revert QEMU to the last good configuration after an error. However, if no good configuration was found, fault-tolerant module will revert QEMU to the default safe configuration after an error.

In our previous work, we sucessfully partition memory layout as: reliable zone, normal zone and DMA zone. Thus, based on this work, we can set original memory in the normal zone, and the mirror memory in the DMA zone. The key idea is: when memory management module (MMU) allocates memory space for a process, it creates the mirror space for the same process. We hope to guarantee the write synchronization using binary translation technique.

The process of creation mirror space:

Currently, I implement mirror memory in XV6, where I modify the malloc() function to achieve the mirror reservation.

In Figure 3, we firstly revise the memory layout of XV6 system, and create a new API mirror_mappages() function (this function comes from the original function mappages()), during the last step, mirror_mappages() is called to create mirror page table. Through this, we can finish the PTE's creation.

However, not all PTEs from XV6 can be created through that function. For example, during the initialized period, the PTEs are not created by calling mmap(), but by fixing a physical address space to give a page table. After that, XV6 will forch cr3 to direct to that address. Therefore, we can modify the main.c file, where a descriptor "entrypgdir"can be added with mirror parameters. After these modifications, we can successfully create full mirror pages for XV6 system.

To view the source code please see:mirror memory in XV6

The translation block (TB) is the basic unit for QEMU to process the translation (including both guest and host). TBs were converted to C code by DynGen and GCC (the GNU C compiler) converted the C code into host specific code. The issue with the procedure was that DynGen was tightly tied to GCC and created problems as when GCC evolved. To remove the tight coupling of the translator to GCC a new procedure was put in place; TCG.

The dynamic translation converts code as and when needed. The idea was to spend the maximum time executing the generated code that executing the code generation. Every time code is generated from the TB it is stored in the code cache before being executed. Most of the time the same TBs are required again and again, owing to what is called Locality Reference, so instead of re-generating the same code it is best to save it. And once the code cache is full, to make things simple, the entire code cache is flushed instead of using LRU algorithms.

From the above technology, we can infer that QEMU code cache stores QEMU working state of all translation modules. The translation module is the most import issues, if we hope to recover QEMU dynamic state. Thus, after recovering QEMU static state and dynamic memory, we hope to recover working state. To this end, recovering code cache state is the most direct way. 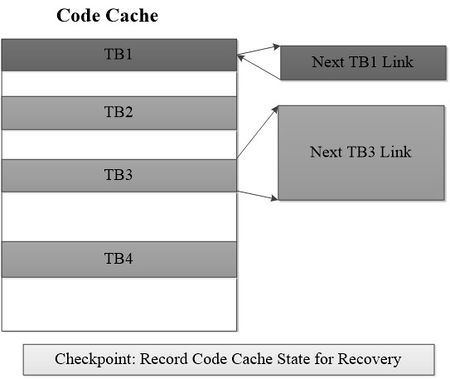 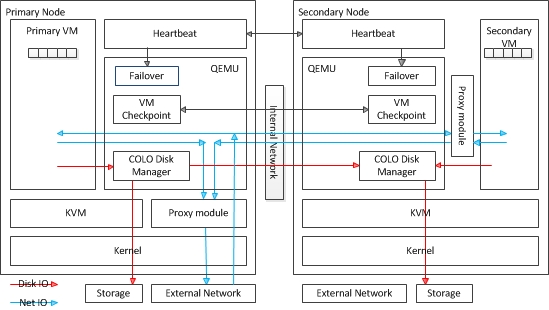 Figure 6: Using Colo arhictecture to recover VM and its state

Shown in Figure 6, it consists of a pair of networked physical nodes: The primary node running the PVM, and the secondary node running the SVM to maintain a valid replica of the PVM. PVM and SVM execute in parallel and generate output of response packets for client requests according to the application semantics. The incoming packets from the client or external network are received by the primary node, and then forwarded to the secondary node, so that Both the PVM and the SVM are stimulated with the same requests.

COLO receives the outbound packets from both the PVM and SVM and compares them before allowing the output to be sent to clients. The SVM is qualified as a valid replica of the PVM, as long as it generates identical responses to all client requests. Once the differences in the outputs are detected between the PVM and SVM, COLO withholds transmission of the outbound packets until it has successfully synchronized the PVM state to the SVM.

COLO comes from my colleague's work when I was a Ph.D student. We can change their architecture for Uniserver purpose. For more COLO information please see COLO research wiki.

We can backup mirror memory from the host to a guest OS which uses reliable domain. Therefore, we can use COLO-based approach to recover host memory through the socket/network (we can have further discussion about it).

We hope to set an exception-driven backup. Assume that Healthlog or MCE log reports errors to the Linux kernel but the report does not trigger the interrupts, a handler will raise the backup functions to start backup memory data to the mirror memory. For code cache, we set checkpoint every 10 seconds (this timestamp could be estimated).

After QEMU occurs the exception and quit from the errors, we can use a checkpoint to recover it.