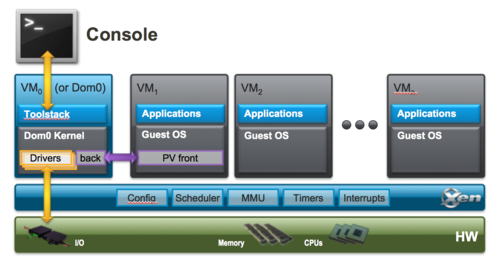 Paravirtualization is an efficient and lightweight virtualization technique originally introduced by Xen Project, later adopted by other virtualization platforms. PV does not require virtualization extensions from the host CPU. However, paravirtualized guests require a PV-enabled kernel and PV drivers, so the guests are aware of the hypervisor and can run efficiently without emulation or virtual emulated hardware. PV-enabled kernels exist for Linux, NetBSD, FreeBSD and OpenSolaris. Linux kernels have been PV-enabled from 2.6.24 using the Linux pvops framework. In practice this means that PV will work with most Linux distributions (with the exception of very old versions of distros).